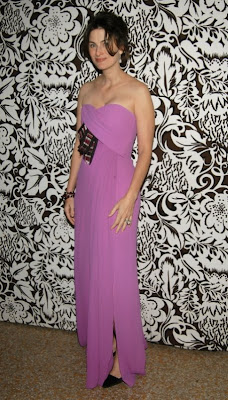 Sometimes when you start to write a post it can end up going off on a tangent. Such was the case with this one.

I originally wanted to talk about the backdrop of fabulous Carolina Herrera fabric that was used at the Apollo Circle Gala at the Metropolitan Museum of Art which was sponsored by Carolina Herrera. I thought it would make a great home decor fabric. It got me wondering if Mrs. Herrera ever has plans to create a home line. The CH brand has some Hermes type leather accessories and wool blankets but I’m surprised someone hasn’t tapped her to create at least a line of bedding by now. She has such impeccable taste that I’m sure it would be an instant success. Then the photo of Marina Rust Conner in front of the Carolina Herrera backdrop had me wondering if anyone knew that Ms. Rust had written a novel called Gatherings. I own this little book and remember enjoying it when I read it. It’s out of print now but you can still find it online. It’s funny how her stance in real life almost matches the photo on the book jacket.

“The action in Rust’s deftly written first novel centers around Meredith, a wealthy young woman who is trying to overcome a childhood spent in a dysfunctional family plagued by drug addiction, alcoholism, and insanity. Haunted by the untimely death of her mother, who deserted Meredith and her father, she shuttles between a South Carolina plantation and a Maine vacation home owned by her mother’s family. She must in turn deal with her cousin Felicity and Felicity’s brother Pearce, who have their own demons to conquer, including their uncle’s mysterious suicide. As she contrasts Meredith’s developing strength of character with the defeatism that threatens to destroy her family, the author’s disjointed style of reminiscence and unresolved conversations serves the theme of adolescent trauma quite well.”

The book wasn’t a best seller but it was well received. It also supposedly mirrors her family in many ways including the mental illness of her mother and life at their home in Maine which she now owns and can be seen in the new Vogue Living book by Hamish Bowles. They say you should write about what you know and I can just imagine her picturing the house and it’s interiors below as she was writing. It also just goes to show that every family has demons no matter how perfect everything may appear on the facade.