My post about chrysanthemums yesterday reminded me of the Japanese artist Takashi Murakami, who uses smiling chrysanthemum cartoons in his work. Murakami is all the rage these days and currently has an exhibition at the Museum of Contemporary Art in Los Angeles that has attracted celebrities and art enthusiasts, as well as serious shoppers, due to the freestanding Louis Vuitton store inside. Once again, another example of art and fashion colliding with the help of some serious brand management.

“If you look at the world of art people interested in contemporary art, they are usually interested in luxury,” said Yves Carcelle, the president of Louis Vuitton. “The bridge between the two worlds is more and more obvious.” Mr. Carcelle underscored the point by noting that 60 of the MOCA Murakami bags were sold in the show’s first week alone. 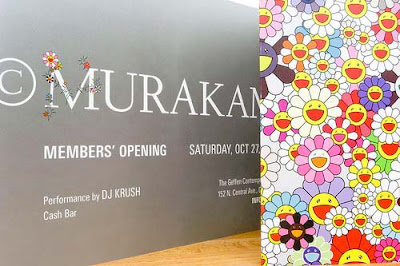 The first deluxe boutique to be integrated in a formal exhibition, the Murakami-Vuitton store is “a terrific example of not just the artist embracing commercial success but proactively going after it,” said Elizabeth Currid, the author of “The Warhol Economy: How Fashion, Art and Music Drive New York City” (Princeton University Press, 2007). In this kind of venture, everyone profits, Ms. Currid said. “You are creating a new kind of product, one that expands the economic horizons of all the parties involved.” 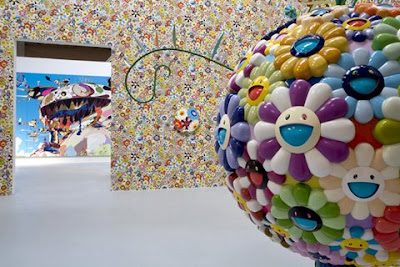 There has been a lot of comparison between Takashi Murakami and Andy Warhol as well. Murakami calls his studio the factory just like Warhol and has a team of assistants who actually “create” his art which also blurs the line between high and low, similar to Warhol. For some reason, the fact that Andy Warhol had assistants creating silk screens doesn’t bother me but within the contemporary art world of today, I am bothered by an artist who doesn’t actually make his own art. I know that many of the old masters had assistants to help them and that architects don’t actually put up the buildings they design but when does an artist who doesn’t actually create art stop being an artist and start becoming an art director? Especially, when much of the work is done with the aid of PhotoShop and computers.

Michael Darling a curator at the Museum of Contemporaty Art says, “the fusion of art and computing led Murakami to a pictorial style that rejects the illusion of depth and perspective. Dubbed superflat, the approach isn’t entirely new – Warhol’s paintings often read flat – but Murakami has something else in mind. Superflat captures the aesthetics of our technological age: PDAs, digital billboards, flat-screen TVs. Superflat also refers to the leveling of distinctions between high and low. Murakami likes to flaunt that he can make a million-dollar sculpture and then take the same subject and crank out a bunch of tchotchkes.” I’m curious as to what everyone else thinks. Is it art or a product? 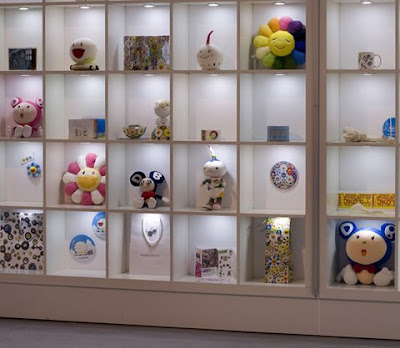