Everyone drooled over Julie and Luke Janklow’s white townhouse when it was featured in Vogue and now it can be yours for $25 Million. The gossip on Page 6 was that the couple was divorcing and it was confirmed when the 25 foot wide 8,100 sf home was put on the market. It seems like a bargain considering how much money they put into it but buyers should beware. The townhouse seems to bring on bad luck in marriage. The Janklow’s bought it in 2004 from Andre Balazs and Katie Ford who sold it when they were divorcing. The description from Brown Harris Stevens is fascinating and slightly amusing. “Anchored by two massive 16th-century stone fireplace mantels, the 60-foot parlour drawing room sets the tone for the residence by establishing a texture of modern lines and open space set against historic furnishings and classic architectural details.” The furniture includes 18th-century chairs and pieces by Jansen, Karl Springer, and Vladimir Kagan according to Vogue. “The drawing room accommodates elegant entertaining in any season or invites a young child to race a bicycle across the perfect marble floor. (As long as he doesn’t fall and break his head open!) The southern half of the space converts into a movie theater with a rear projector and screen descending from the ceiling.” Thank goodness the townhouse boasts an elevator. All those stairs look exhausting! But maybe that’s how Julie Janklow stayed so thin. I heard that they made guests take off their shoes so as not to ruin the white marble floors. Usually the rule of thumb is that if you can afford white marble floors, then you should be able to afford to them them cleaned if someone messes them up. “The master suite contains his and hers baths, two fireplaces, and two private dressing rooms: hers, fashioned in Perspex and glass with pink silk carpeting (see below), his with a fireplace and windows with three exposures.” The periwinkle chairs weren’t featured in the Vogue shoot but complement the painting by Stephen Hannock beautifully. I’m not sure what room this is used for since the marketing materials state that they garden can be accessed from by the twin sets of floor to ceiling French doors from the parlour level kitchen or via the garden level formal dining room. I guess it could be part of the formal dining room. I just realized that the chandelier is the same as the one in the dining room photo from Vogue but they must have styled the room differently for the shoot. Interesting. The “well-proportioned planted rear garden of Portuguese cobblestone” was designed by Miranda Brooks and features fifties wrought-iron furniture. I wonder if the buyer will ask for any of the furnishings to be included in the sale. The chairs look really pretty in the garden. This room is part of the kitchen and look like a breakfast area or it could have been styled that way during the Vogue shoot since it also has the same chairs as the dining room below. 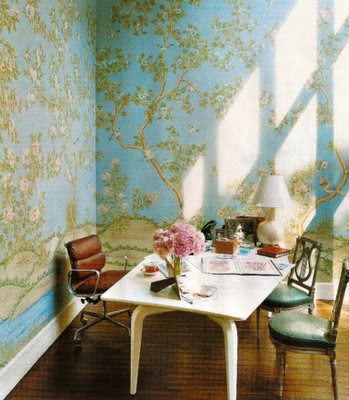 The rear of the fourth level, has a double-height office decorated with custom hand-painted chinoiserie wallpaper by Gracie, a sleek white full bath, and a planted terrace. The desk is by Monteverde. 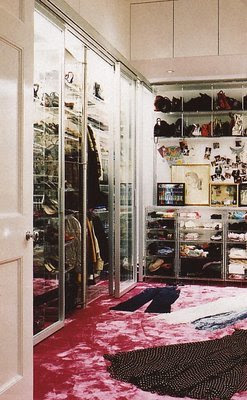 Her dressing room was fashioned in Perspex and glass with pink silk carpeting and was inspired by Joan Crawford’s in the movie Mommie Dearest. “Fashioned by a young couple of unusual creativity and taste for their specific needs, this townhouse could also accommodate up to six bedrooms as it contains five extraordinary baths and a glamorous powder room.” I just hope the next couple who buys the townhouse doesn’t get divorced after they buy it!
Tweet This
Share This
tags
janklow, new york, Uncategorized, vogue