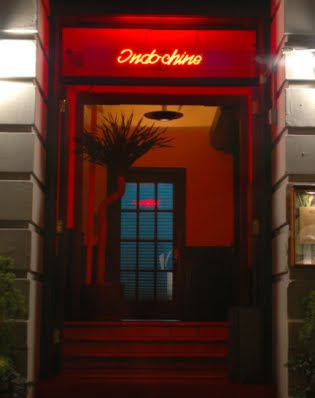 In a city where restaurants close as fast as they open, the fact that Indochine is celebrating it’s 25th Anniversary is a testament to its iconic appeal. To help commemorate this wonderful achievement, they are also publishing a book which was just released today, Indochine: Stories, Shaken and Stirred that is chock full of great photos of celebrities that have frequented parties at this chic restaurant since it opened in 1984. I wish the book cover featured the fabulous banana leaf wallpaper that is just as iconic as the restaurant itself! I will get to where it originated in a minute. I think the website perfectly describes Indochine as “a timeless classic that combines stylish ambiance, tropical decor, and exotic French-Vietnamese cuisine that is perfect for intimate dinners and private events alike.” Just like photos celebrities in front of the famous zebra print banquettes let you know they were at the El Morocco nightclub, the photos of celebrities in front of the famous banana leaf wallpaper let you know there were at Indochine! Here is a photo of Andy Warhol, Jacqueline Schnabel, Jean-Michel Basquiat, Julian Schnabel and Kenny Sharf at the opening party. Of course Vogue knows the appeal of this fabulous wallpaper and restaurant which is probably why the chose it for a recent photo shoot by Steven Meisel of Vanessa Traina and Dree Hemingway for the August 2009 issue. It’s funny how the restaurant still looks as chic as it did the day it opened and never seems dated.

The banana leaf wallpaper didn’t originate at Indochine though. It gained popularity from the Fountain Coffee Room at The Beverly Hills Hotel and has has been their signature as well since it opened in 1949. I’ve seen it for sale on the Designer Wallcoverings website that doesn’t seem to be working but I’ve also ordered the paper called Martinique from Hinson in New York. Not sure if they are one in the same but they look similar. Nicky Hilton grew up for a time in The Beverly Hills Hotel so she decided to wallpaper her kitchen and breakfast area in the paper that she calls “nostalgic.” It was featured in InStyle magazine and you can see Nicky give a tour online here. Designer Brian Atwood wasn’t as sure about the banana leaf wallpaper when his former boyfriend, the interior designer Nate Berkus, suggested it for his Milan apartment. But it became his favorite thing and it does look chic mixed with the vintage brass dining table. You can see more in the April 2009 issue of Elle Decor magazine. The wallpaper actually came with this house in New Orleans that was featured in the October 2008 issue of House Beautiful magazine. It’s a perfect complement to the real banana leaves in the courtyard right outside! Whether inspired by Indochine or The Beverly Hills Hotel, there is no denying that the banana leaf wallpaper is very chic and never goes out of style! I think I might have to figure out a place to use it in my future house!
Tweet This
Share This
tags
banana leaf wallpaper, beverly hills hotel, indochine, martinique wallpaper, Uncategorized