Jason Wu has been the darling of the fashion world since Michelle Obama wore one of his gowns to the inaugural balls last January and rightly so since it’s wonderfully talented. That also makes him on of the favorites of Vogue so it’s not surprising that he recently had his new showroom designed by Anna Wintour’s interior designer. The husband and wife duo of Jesse Carrier and Mara Miller of Carrier and Company worked with architect Giancarlo Valle on the 9,000 square foot space in the Garment District. 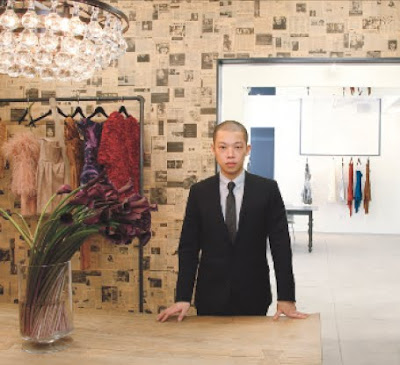 I thought the walls were covered with newspaper but it’s actually New York Observer collage wallpaper by Elizabeth Dow. 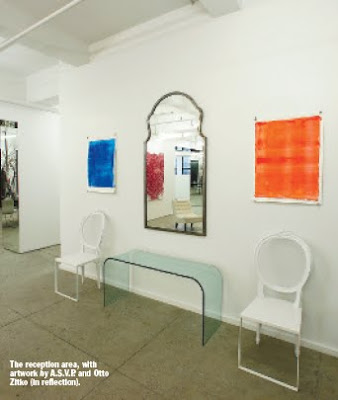 I love the mirror in this other view of the reception area. Jason Wu is a very busy designer! He has already debuted a line of sunglasses and has also designed dolls and a digital camera and will design a small capsule collection for TSE Cashmere this summer. I’m sure shoes and handbags won’t be far behind!

According to Jason, stores based on the showroom design might also be on the horizon. It’s nice to see good things happen to good people and wonderful designers. For more about this 27 year old wunderkind, check out the March issue of W Magazine.