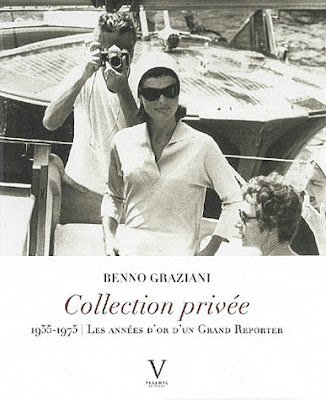 Whenever I visit Barneys, I love to check out the books on the 9th floor. I came across one book recently that is especially chic. In English it’s called Reporting in Style and in French, Collection Privée.  Regardless of the name, the photographs by Benno Graziani will speak for themselves.  Benno Graziani was one of the founders of Paris Match along with Daniel Filipacchi and Willy Rizzo.  He told British Vogue, “Match was our little club. There were no editors meetings because we hardly spent time apart from each other – and it worked! Some editions sold more than two million copies…very quickly we were the best. The worlds press envied us and tried in vain to imitate us.” He also became friends with many of his subjects including Jackie Kennedy Onassis who invited him on vacation with her.  “She (Jackie) began as a reporter-photographer and led a truly exceptional life, a fairy tale transformed into Greek tragedy. Today she is part of history,” Graziani added. “There are people who make history, those who endure it, and those who tell about it. That’s me.”